The humble Tata Nano, which was the brainchild of Ratan Tata did not survive the market demand. However, there are still many who own the micro car and use it regularly. While the crash test ratings were not very popular back when the Nano came to the market, here is the result of a crash between a Toyota Fortuner and Tata Nano.

The incident is reported from Kerala. The incident happened on the road when a Tata Nano suddenly stopped due to an obstacle. The Toyota Fortuner moving behind could not stop in time and crashed into the Tata Nano. The impact between the two cars caused some damage to the front end of the Fortuner. As the video shows, the impact caused the left front of the Fortuner to dismantle.

Even the bonnet lid has a bend, and the bumper has fallen off. The impact has almost reached the wheel arch of the Fortuner. Meanwhile, a picture of the Tata Nano’s rear show minimal impact. We can spot a dent on the tailgate and some effect on the right C-Pillar.

Impact offset due to the height difference 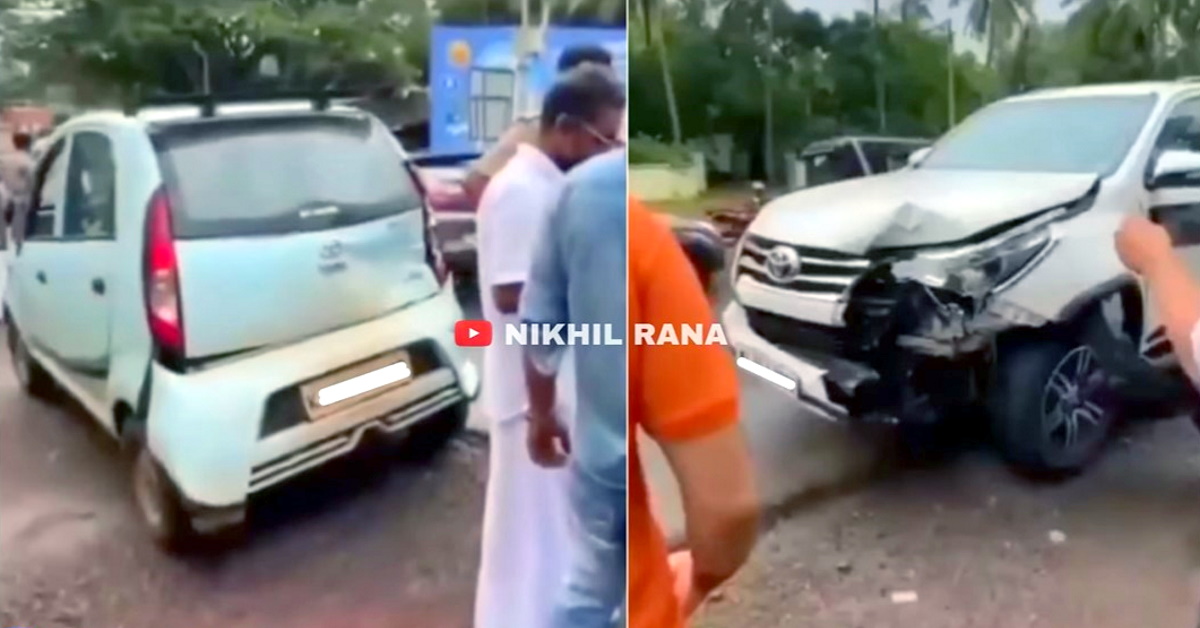 Since the Fortuner is an SUV and is a car with high ground clearance, the impact with the Nano was offset. The bumper of the Tata Nano is much lower in height than the Toyota Fortuner. This is why the Fortuner impact fell on the C-Pillar of the Nano. The C-Pillar is not a crumple-zone so it did not budge. The impact zone of the Fortuner is a crumple zone and that is why we can see so much of damage on it.

We are not sure about the injuries suffered by the occupants of the Tata Nano and the Fotuner. However, since the Tata Nano received the impact on the pillar, the occupants must have felt a much stronger impact compared to the passengers inside the Fortuner.

The crumple zones are designed to crumple down and absorb as much energy as possible during an accident. The safe zone lies between the two crumple zones and it has been designed to remain intact even during the extreme crashes and keep the occupants safe.

It should be noted that ASEAN NCAP has not crashed tested a Fortuner. Instead, a Hilux was used for the crash test and the Fortuner’s capability is an extension of the same. ASEAN NCAP claims that Fortuner has comparable occupant protection to the tested pickup. They also said that the technical evidence was provided by Toyota proves the same. It is not the Indian-spec Fortuner. The model is sold in Thailand and Indoensian markets.

Thu Nov 17 , 2022
U.S. fans of the Fiat 500 can look forward to a new, fully electric generation of the pint-sized hatchback making it to these shores in early 2024. Fiat plans to make a formal announcement later on Wednesday at the 2022 Los Angeles auto show, where it will present three one-off […]