The Tramagal Plant in Portugal will become CO2-neutral by 2022

Plants in Japan to follow, to achieve CO2-neutrality by 2039 at latest 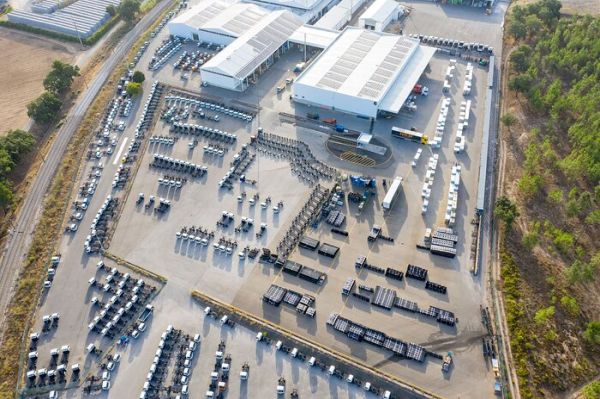 As an integral part of Daimler Truck AG, Mitsubishi Fuso Truck and Bus Corporation (MFTBC; Head office: Kawasaki City, Kanagawa Prefecture; President and CEO: Hartmut Schick) is proud to announce that MFTBC will be following the Daimler Trucks & Buses ambition towards CO2-neutrality in production sites by aiming to shift all plants to CO2-neutrality by 2039.

Operations at Mitsubishi Fuso Truck Europe S.A. (MFTE; Head office: Tramagal, Portugal), MFTBC’s wholly-owned subsidiary in Portugal, will become CO2-neutral already within 2022. Other plants in Japan will follow to achieve CO2-neutrality by 2039 at the latest. MFTBC’s Kawasaki and Nakatsu Plants have reduced CO2 emissions by 17% since 2015.

In these past few years, communities everywhere have been rapidly accelerating their efforts toward decarbonization and carbon neutrality. The Japanese government, for example, stated that it would “aim to become carbon neutral [in the automotive industry,] including the entire supply chain” in their action plan for the Green Growth Strategy, which was approved by the cabinet in June 2021.

Amidst these developments, MFTBC follows the Daimler Trucks & Buses target to offer only new vehicles that are CO2-neutral in driving operations (“tank-to-wheel”) in Europe, Japan and North America by 2039. Daimler Truck AG aims to accomplish this goal by electrifying its vehicles and is following a dual-track strategy to this end.

As early as 2022, Daimler Trucks & Buses wants its vehicle portfolio to include series-produced vehicles with battery-powered drive systems in the main sales regions of Europe, the United States and Japan. Beginning in 2027, the company wants to supplement its vehicle portfolio by adding series-produced hydrogen-powered fuel cell vehicles. The ultimate goal is to achieve CO2-neutral transport on the road by 2050.

In addition to these targets for its products, Daimler Truck AG is also committed to sustainability in other aspects of the value chain, including the production process. All European Daimler Trucks & Buses plants will have a CO2-neutral energy supply by 2022.

MFTE has announced that its Tramagal plant in Portugal is setting the course for sustainable truck production by achieving carbon neutrality by the end of 2022. The Tramagal plant is currently the center of production for the FUSO light-duty Canter and all-electric eCanter trucks in Europe. 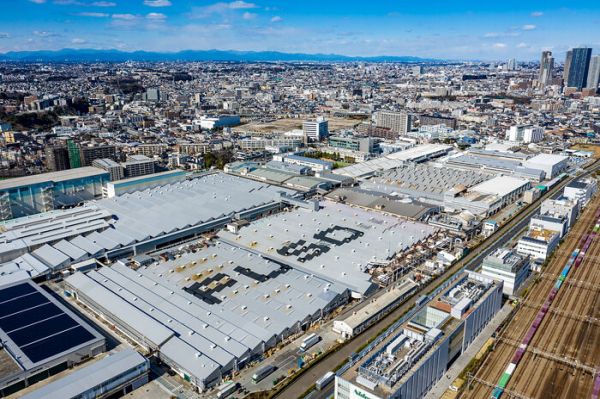 Initiatives at the Tramagal plant include:

The plant will also be exploring the possibilities of green hydrogen production with the support of solar panels, to gradually replace natural gas consumption

In recent years, the Tramagal plant was able to progressively reduce CO2 emissions and is expecting a further 50% cut in 2021 compared to the previous year before achieving CO2-neutral production in 2022.

Three other MFTBC plants located in Japan – Kawasaki, Toyama and Nakatsu – will follow Tramagal and aim to become CO2-neutral by 2039 at the latest.

At the Kawasaki Plant, where MFTBC’s headquarters are also located, and the Nakatsu Plant, where transmissions are manufactured, MFTBC implemented a 5-year plan to decrease CO2 emissions by 17% compared to 2015 levels. Building on this track record, MFTBC has created a new roadmap to decarbonize the Kawasaki Plant by 2039. Other facilities crucial to the MFTBC production network, including the bus manufacturing plant in Toyama, as well as the Nakatsu Plant, will also be in scope under the 2039 target.

In 2013 and 2014, solar photovoltaics (PVs) were installed on the roofs of buildings in the Kawasaki Plant

Installation of additional solar PVs is planned for the near future

Integration of other energy sources like hydrogen is also under consideration

MFTBC has also started researching possible ways to reduce CO2 in its production process. For example, MFTBC is evaluating the possibility of reducing CO2 and volatile organic compounds (VOC) emitted in vehicle painting by relying more on other surface treatments.

MFTBC will also pursue carbon neutrality across the value chain

In addition to production areas, MFTBC is also looking at other aspects of the vehicle value chain. At each stage, we have started considering possible ways to reduce and eliminate CO2 emissions, some of which have already been implemented. 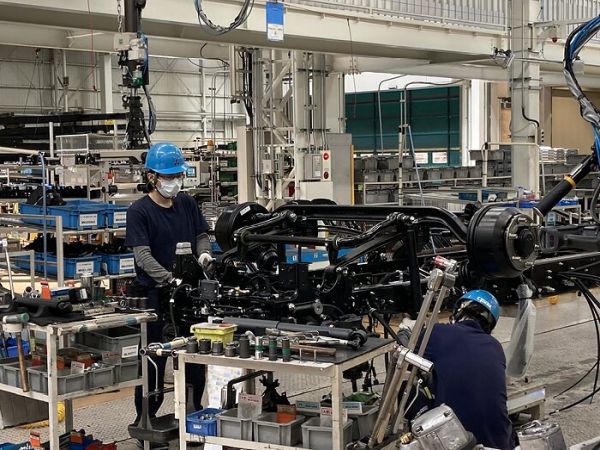 Logistics is another area to which MFTBC is turning its attention to promote reduced CO2 emissions across the value chain. MFTBC has started evaluating methods of quantifying carbon emissions that occur both when receiving materials and components from our suppliers, and delivering our products to customers. In these areas, MFTBC is already proceeding with the following countermeasures:

reducing CO2 emissions from deliveries, by revising the number of trucks to deliver components and products; optimizing modes of transport; adjusting cargo utilization and routes

MFTBC is creating a carbon neutrality roadmap for its logistics operations and will soon expand these areas of effort.

An example of this effort is the CDP Climate Protection Survey. To create more transparency about the environmental impact of our supply chains, Daimler Trucks works with organizations such as CDP (formerly the Carbon Disclosure Project). In 2020, key suppliers were invited to participate in an annual survey to report their environmental impact, including their level of CO2 emissions.

Until now, suppliers representing more than 70% of the annual purchasing volume of the Daimler Truck and Bus business have been asked to participate, with the scope expected to increase in 2021 and support the effort to reduce CO2 emissions throughout the automotive supply chain.

MFTBC will not wait until 2039, nor go it alone

While MFTBC has set 2039 as our target year, we are committed to becoming CO2-neutral as early as possible. As the Tramagal Plant and other Daimler Trucks & Buses production facilities in Europe remain on track toward achieving carbon neutrality by 2022, the learnings from these locations will aid in accelerating the MFTBC’s efforts to reduce its global environmental impact.

Moreover, by extending its own initiatives to other entities within the group, MFTBC will further contribute to Daimler Trucks & Buses’ aims for carbon neutrality.

Hartmut Schick, President and CEO of MFTBC, states, “Climate change is a topic that needs to be addressed and solved worldwide. Therefore, the electrification of commercial vehicles cannot be achieved by manufacturers and customers alone.

Inter-industry alignment and governmental support will also be vital in establishing effective transformations throughout logistics and the supply chain. Collaborative actions between public and private sectors are essential to succeed in this major challenge.”


…for achieving the two-degree target during a climate conference simulation Setting emissions targets for fossil fuels, making political decisions about deforestation and land use, and establishing a climate fund – around 300 students grappled with th more >>

“Signing a comprehensive contract with a visionary more >>


Starting in 2026, Audi will only launch new all-electric models on the global market
Audi will phase out production of the last internal combustion engines by 2033        Audi more >>


Green Technology: Environmental Projects Are Picking up Pace at Audi


What is Audi doing to protect the environment? This question was the focus of TechTalk: Green Technology, at which Audi presented some complex and innovative technology topics on June 9 and 10, marking the kickoff of the GREENTECH FESTIVAL corporate event on June 17 and 18. more >>


The world’s first ever zer more >>


Clean Air Zones- are you ready?


With Birmingham launching its Clean Air Zone (CAZ) on Tuesday 1 June, road users are being reminded to assess the impact on their journeys and explore options for upgrading non-compliant vehicles. Vehicles are not banned in the Birmingha more >>


CNH Industrial has published the companion guide to its 2020 Sustainability Report. For the first time, this edition of A Sustainable Year is proposed as an interactive online magazine. Visit more >>


Volvo Cars today made a significant step towards its ambition of making its global manufacturing network climate neutral by 2025, announcing that its Torslanda site in Sweden is its first car manufacturing plant to reach fully climate-neutral status. more >>


Mercedes-Benz to use green steel in vehicles in 2025, reducing its carbon footprint


Equity stake in H2 Green SteelMercedes-Benz AG is the first car manufacturer to take an equity stake in Swedish start-up H2 Green Steel (H2GS) as a way to introduce CO2 free steel into series production. Together with its steel suppliers, the company is r more >>


SYNETIQ announce the ‘The Road to Tomorrow’ – their sustainability roadmap    Company has avoided 5.5 million KGs of CO2 by supplying ‘Green Parts’ to Britain’s fleets and insurers    CO2 saving large enough to power 1000 homes for one year&nbs more >>


The Audi Environmental Foundation and the “Energie Effizient Einsetzen” (“use energy efficiently”) association are investigating the impact of peatland conservation, humus formation and reforestation on the regional climate        Peatland is a highly efficient carbon store offering greater storage cap more >>


Hydrogen energy: what are the benefits for the EU?


Find out what the benefits of hydrogen energy are and how the EU wants to make the most of it to support the green transition.Clean energy: essential for a climate-neutral Europe more >>


The BMW Group is underpinning its mission for sustainable mobility with ambitious goals for the reduction of greenhouse gases: At today’s Annual General Meeting, the company announced that it will avoid emission of over 200 million tonnes of CO2 by 2030. This is equivalent to more than 20 times the annual CO2 emissions of a city with over a million inhabita more >>


– Air: reduce by more than 55 % premature deaths caused by air pollution;- Water: reduce waste, plastic litter at sea by 50 % and microplastics released into the environment by 30 %;
– Soil: more >>


– Extensive package of measures aimed at accelerating the sustainable production and use of electric cars  – The company aims to cut CO2 emissions in Europe by an average of some 17 tons per vehicle by 2030, 40 percent less than in 2018  – Investment of 14 billion euros in decarbonization by 2025  – Green electricity f more >>


As a driver of performance and innovation, a new environmental and societal strategy is incorporated into the Renaulution strategic plan.     This strategy adapts the Group’s Purpose into an operational roadmap; it helps the company through its transformation by ramping up the ecological transition, enhancing the safety of more >>


The fight against climate change requires big business commitments as well as everyday things    SEAT S.A. employees describe how they contribute to reducing their carbon footprint in their daily lives    Sustainable mobility, reducing plastic consumption and going paperless are some of the measures they put more >>


In pursuit of the company’s goal to establish sustainable leadership, Hyundai Motor has announced a pan-European partnership with the marine conservation organisation Healthy Seas    By partnering with Healthy more >>


Toyota Motor Europe becomes a shareholder in the start-up EODev (Energy Observer Developments)    Stronger partnership between Toyota and EODev in their shared commitment for decarbonisation with reliable, sustainable and acce more >> 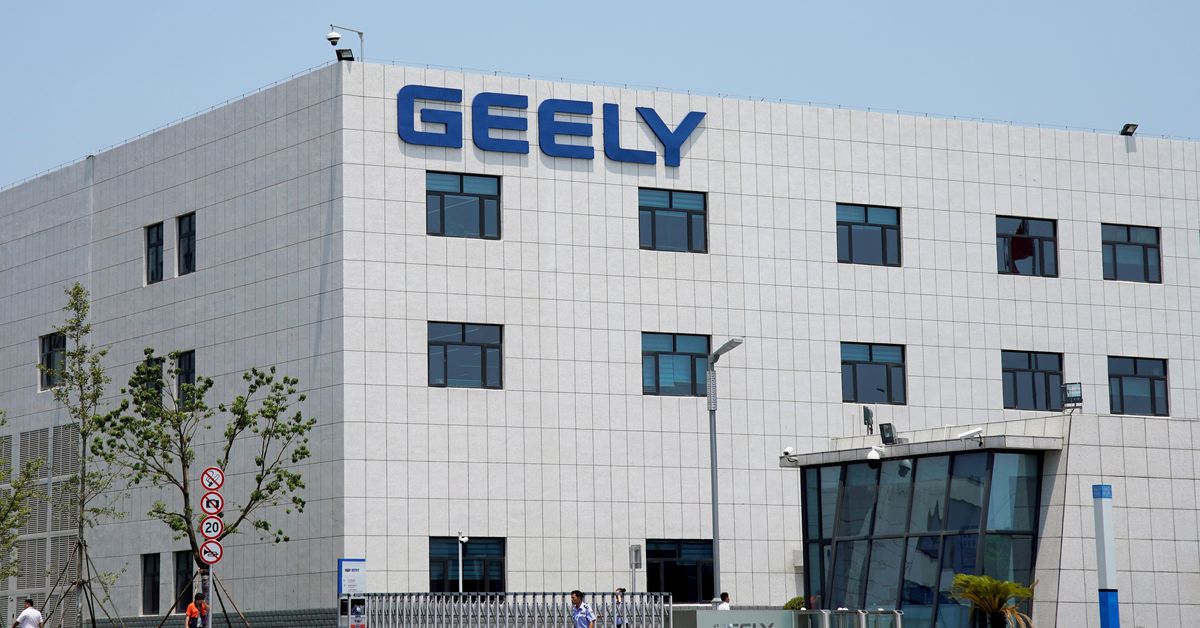