Our vehicles’ airbags are easily forgotten until their use is required to prevent significant injury in the event of a collision. This, of course, is an easy oversight to make. The vast majority of a vehicle’s airbag system is hidden away until it is deployed at a moment’s notice, leaving one to contemplate how to proceed.

Unfortunately, the deployment of one or more of a vehicle’s airbags is a double-edged sword of sorts. While such a deployment is quite likely to have saved a life or mitigated severe injury, one is also left with a cabin full of discharged airbags, and broken panel trim to match.

This creates quite a mess to clean up, assuming that the vehicle in question has not been totaled. As a result of this exact scenario, many are left questioning how much it costs to have a vehicle’s airbag replaced.

Though most expect this number to be quite high, few are able to put their thumb on an exact price, off the top of their heads. Luckily, we have assembled the following guide to put such questions to rest.

Read on to learn more about a vehicle’s airbag system, including how much airbag replacement costs as a whole.

Read Also – How an Accident Affects the Value of a Car

Parts of an Airbag System 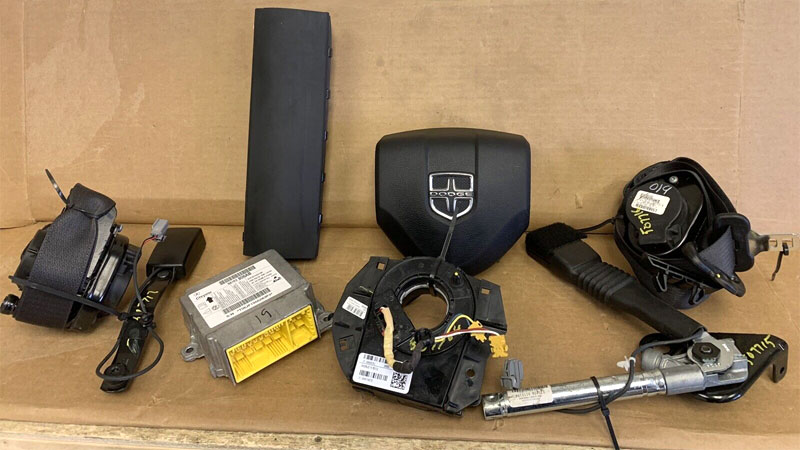 A vehicle’s airbag system is made up of multiple components, each of which is just as vital to proper system operation as the last. By recognizing these individual components, one is better able to understand how the airbag system functions in its entirety.

The following are several of the most vital components of a vehicle´s airbag system.

The assembly in which an actual airbag is contained is referred to as an airbag module. This assembly also contains a dedicated inflator/ignitor unit, which accepts an electrical charge from a vehicle’s crash sensors/SRS unit, and initiates the inflation process.

The average vehicle features at least one centrally-mounted crash sensor, though most vehicles now also feature a host of auxiliary sensors. When impacted, a vehicle’s crash sensors make internal contact, allowing an electrical charge to be sent to each corresponding airbag module.

An airbag diagnostic unit runs preliminary system self-checks during vehicle start-up, thereby alerting a driver to any system issues uncovered in the process. In some vehicles, this module also takes an active role in relaying signals between crash sensors, and their corresponding airbag modules.

All electrical signals transmitted throughout a vehicle’s airbag system are relayed through a specialized wiring harness. This harness connects a vehicle’s crash sensors, airbag control modules, and airbag diagnostic unit.

In order for a vehicle’s SRS unit to maintain constant electrical communication with its corresponding steering wheel-mounted airbag control module, despite constant rotation of the steering wheel itself, a clock spring is utilized.

A clock spring features a ribbon-style wiring lead, spooled to a retractable center assembly, which prevents wire snagging and current loss as the steering wheel is turned.

Though not technically part of the airbag system itself, a seat belt pre-tensioner locks a seat belt in place during a collision, thereby ensuring that a driver or passenger is withheld in the perfect position for airbag deployment.

However, once locked, a seat belt pre-tensioner must either be replaced or disassembled and manually unlocked.

Can Airbags Be Reused After Deploying?

Today’s airbags are not designed to be reused after deployment. In fact, quite the opposite is true.

Due to the manner in which modern airbags operate, it is physically impossible to get more than one use out of any single airbag. While some of the industry’s earliest airbags were indeed designed for reuse, this could not be further from the truth today.

The rapid inflation of today’s airbags is achieved through a specialized chemical reaction. More specifically, sodium-azide and potassium-nitrate are allowed to react with one another in the event of a collision, thereby producing nitrogen gas as a result.

Following an airbag’s initial discharge, there is no longer enough of these chemicals remaining to trigger a second reaction.

How Much Does Airbag Replacement Cost? 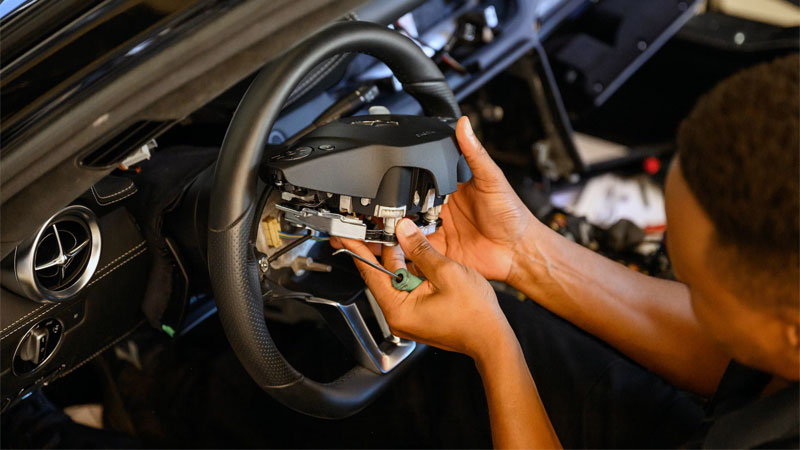 The cost to replace a vehicle’s airbag and restore an airbag system in its entirety to a functional state can vary substantially from one case to the next. This stems primarily from the fact that no two collisions are the exact same. Furthermore, the number of airbag system components affected in a given collision might differ at times.

As a result, it is often difficult for a repair shop to quote a specific price for airbag system repair following a collision until a thorough inspection can be conducted. This allows an individual to fully access the extent of damage that has occurred.

For this reason, it is perhaps best to break down the potential costs associated with such a scenario, on a case-by-case basis. The following are average costs attributed to repairing some of the most commonly affected of all airbag system components.

On average, one can expect to pay anywhere from $200-$800 per airbag module/assembly. However, this price only covers the cost of parts and excludes any labor. Installation alone will easily cost another $150-$300 per airbag.

All totaled, this brings the grand total for airbag module/assembly replacement to $350-$1,100 per unit.

Airbag crash sensors are not cheap, to say the least, with parts alone costing approximately $70-$350 a piece. Once additional labor costs of $50-$100 are factored in, one can expect to pay between $120-$450 in total for replacement.

More often than not, a steering wheel’s clock spring is destroyed during airbag deployment. This leaves little choice but to replace this component as well.

The average clock spring costs between $100-$250, while labor costs of $100-$150 for installation are relatively standard.

Following a collision, a seat belt pre-tensioner must either be manually reset or replaced. Replacement of this unit will cost approximately $150-$250 per seat belt, though such a unit can often be reset for a fraction of this cost.

After one or more of a vehicle’s airbags have been deployed, the affected vehicle´s airbag diagnostic (SRS) unit must either be replaced or manually reset. While one can expect to pay somewhere between $50-$100 to have such a unit reset, replacement (if required) can cost as much as $500-$1,000.

At the end of the day, repairing a compromised airbag system following a collision can be just as expensive as fixing any cosmetic or structural damage that has been incurred.

On the lower end of the spectrum, even the deployment of a single airbag can necessitate up to $1,500 in repairs. Even worse, a bill can easily tally up to $5,000 if multiple airbags have been deployed simultaneously.

Why Are Airbags So Expensive?

As outlined above, airbag replacement is far from cheap. However, there is quite a good reason for this.

An airbag itself is far from simplistic in nature. In fact, for an airbag to even function as intended, a specific chemical reaction must take place, leading to the production of nitrogen, which, in turn, inflates an airbag to capacity.

Furthermore, in the event of a collision, additional components such as collision sensors, or specialized modules might also be damaged, none of which are cheap. Even the labor involved with replacing such components is quite steep, as a wealth of specialized knowledge is required to handle tasks of this nature.

How Long Does Replacement Take?

In most cases, airbag replacement is not an overly lengthy process, assuming that you are armed with adequate knowledge and tools for the job.

On average a single airbag can be replaced in 1-2 hours. However, repair times will be significantly longer in the event that multiple airbags must be replaced. In the most severe cases, the replacement of numerous airbags in a single vehicle can take up the better part of a day to complete.

Can You Replace Airbags Yourself?

Generally speaking, airbag replacement is best left to the professionals. In fact, such a task should only be trusted to accredited service centers that are properly equipped, and have experienced technicians on staff.

This prevents the inadvertent misinstallation of an airbag, which could ultimately prevent discharge in the event of a collision.

Furthermore, airbag installation can actually be quite dangerous for those not properly trained in such matters. If an airbag were to deploy while in a technician’s hand, or within inches of a technician´s face, great bodily harm would almost certainly result.

Can You Drive a Car With Airbags Deployed?

While it might theoretically be possible to drive a car with one or more of its airbags deployed, doing so is certainly not advised.

Airbags are included in all modern vehicles for a reason. Without properly operating airbags, even a moderately-severe collision can turn deadly. An airbag is designed to keep a vehicle’s occupants restrained in the safest possible position in the event of a collision.

Furthermore, other single-use safety components can also be rendered inoperable during a collision, making it even more dangerous to continue driving a vehicle in this condition. Many automotive seat belts are designed to lock in the extended position if actuated with enough force. This, in turn, prevents the reuse of seatbelts following a collision.

In any event, an airbag should always be replaced following deployment. Furthermore, as mentioned above, such replacement should be left to the professionals in almost every perceivable case. This prevents personal injury in the case of an inadvertent discharge.

In most instances, a driver’s insurance policy will cover airbag replacement in full, following a collision in which one or more airbags are deployed. However, before such replacement, or any other repair can take place, your insurance must first determine whether or not they will be considering your vehicle a total loss.

If the decision is ultimately made to total your vehicle, no repair will take place. Instead, you will be cut a check for the approximate value of your vehicle, prior to the collision in which it sustained this level of damage.

Steve is a former ASE Certified Technician and holds a degree in automotive service technology from Weber State. When he’s not searching for a 10mm socket in his garage, he enjoys a good BBQ with family and friends.

Using Apple AirTags to Keep Track of Your Corvette

Sat Nov 12 , 2022
&#13 Image Credit history: Keith Cornett&#13 So it was another week below in paradise, which is code for “Here will come an additional hurricane!” For the 2nd time this Hurricane period, I moved my ’66 Corvette from my garage to a protected parking facility in Tampa for two times until […]