Today’s internal combustion engines are relatively complex in nature, featuring some critical components, none any less valuable than the last. The vast majority of these components, as well as the systems they make up, have evolved significantly from what there were just 20-30 years prior.

Perhaps no automotive system has undergone such substantial revision as that which pertains to fuel delivery. What once was accomplished through the use of a carburetor, is now achieved with cylinder-specific fuel injectors, which atomize the fuel into each individual combustion chamber.

While this method of fuel delivery is rather efficient, it does come with its own inherent issues. Injectors can fail or can become plugged, leading to a number of secondary issues, many of which can significantly hinder a vehicle’s drivability. To fix such issues, one must be able to identify symptoms related to injector failure as they are encountered.

What Do Fuel Injectors Do?

Furthermore, injectors deliver fuel in a precise manner, as specified per engine timing.

This form of fuel delivery differs from carburetion due to the fact that fuel is dosed in a cylinder-specific manner. This not only leads to increased combustion efficiency and horsepower but reduced emissions as well.

Where Are They Located? 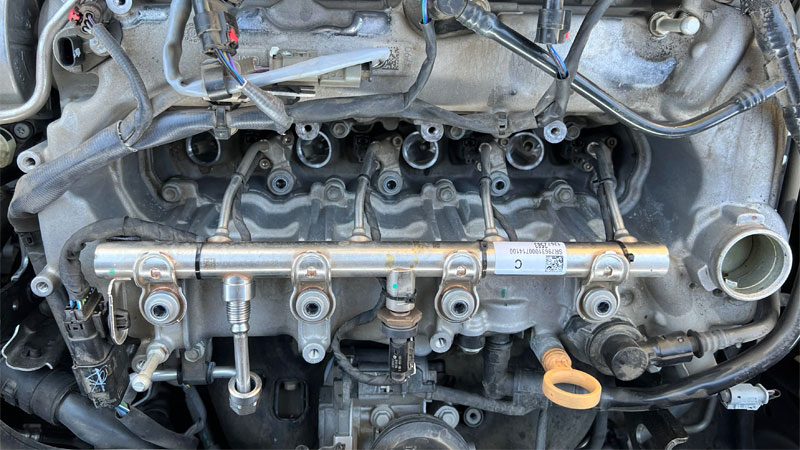 Fuel injectors are traditionally mounted within an engine’s intake manifold, within close proximity to each respective cylinder head. As fuel is injected, it is mixed with incoming intake air, and pulled via vacuum through an open intake valve. This configuration is true of most engines currently marketed.

However, there is an exception to this rule as well. Direct injection engines feature head-mounted injectors, which make in-cylinder fuel/air mixing possible. This is an engine design that has become increasingly prominent over the past decade.

A fuel injector can fail to perform as intended for multiple reasons. However, such issues can be largely consolidated into two categories, electrical/mechanical failure or clogging. Each of these issues can prove problematic and can lead to a host of troubling symptoms.

The term “faulty” is typically used to describe any fuel injector that has experienced electrical/mechanical failure. In such cases, an injector’s electrical circuitry fails, causing an open condition, or the mechanical internals of an injector degrade.

On the other hand, a fuel injector can also become carbon-fouled, thereby preventing an injector’s tip from opening/closing completely. This often results in an irregular fuel stream or a persistent fuel flip. Under either of these circumstances, engine performance is sure to suffer.

Signs of a Bad Fuel Injector

The presence of a faulty fuel injector is often accompanied by a number of troubling secondary symptoms. Recognizing these symptoms is key when attempting to expedite repair wherever possible.

The following are several of the most common symptoms of a faulty fuel injector.

The presence of one or more faulty fuel injectors will lead to a misfire condition that is relatively consistent in nature. This will often lead to a noticeably rough idle, or even a certain degree of hesitation under higher periods of throttle demand.

A faulty injector robs an engine of a certain degree of fuel efficiency. This problem only compounds with each additional fuel injector that fails. This will perhaps be most noticeable at the pump, as fill-ups become ever more frequent.

Whenever an injector fails, total engine output is reduced to a specific degree. While this is most noticeable in smaller four-cylinder engines, this reduction in power can also be observed in larger engines of a “V” configuration.

In certain instances, a faulty fuel injector can cause your vehicle’s exhaust to carry a rich smell of fuel. This is especially true if the injector in question is hung open, allowing fuel to be dosed at an excessive rate, or at inappropriate times.

In the vast majority of cases, the failure of one or more injectors will quickly cause a vehicle’s check engine light to illuminate, as all applicable DTCs are stored.

This occurs as a result of the ECM’s ability to determine relative cylinder contribution rates.

Similarly, the failure of either one of these components can easily lead to a misfire on one or more cylinders.

For the reasons provided above, it is extremely important to take care when diagnosing a misfire concern. One can easily find themselves chasing fuel-related concerns that actually do not exist when a spark-related concern was the underlying issue at hand.

A trouble tree should be followed in its entirety, whenever addressing issues of this type.

How Long Do Fuel Injectors Last? 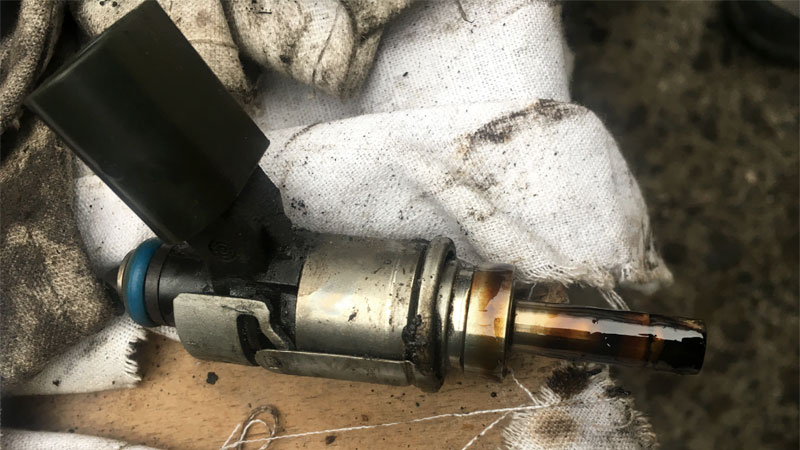 Nonetheless, most manufacturers specify that their fuel injectors should last for a total of 50,000-100,000 miles, without the threat of imminent failure. However, it is not unheard of for injectors to experience significantly greater lifespans than that which is specified by this general estimate.

Can a Malfunctioning Fuel Injector Damage the Engine?

A malfunctioning injector, if not cleaned or replaced in a timely manner, can indeed result in engine damage. This is due to the fact that irregularities surrounding the atomization and timed delivery of fuel can result in cylinder pre-ignition.

This term is used to describe a condition in which combustion takes place at less than optimal timing, or at a less than efficient rate. Prolonged instances of pre-ignition can result in damage to an engine’s combustion chamber, and the piston retained within.

Additionally, the excess downstream dosage of fuel into an engine’s exhaust can also lead to rapid deterioration of a vehicle’s catalytic converter. This often necessitates costly, and otherwise unnecessary repair.

In certain instances, the use of commercial fuel injector cleaners can prove helpful when attempting to renew carbon-fouled injectors. However, the use of these products should not be considered a cure-all, nor a replacement for the removal and hand cleaning of dirty or clogged injectors.

Fuel injector cleaner is best used periodically as a preventative means of warding off carbon fouling. This tends to be a far more effective approach than simply attempting to treat the issue after it has already compounded to an unmanageable degree.

After carbon-fouling has reached a certain threshold, there is little chance of reprieve through injector cleaner use.

Fuel injector cleaning costs pale in comparison to that of total injector replacement and serve as a cost-effective means of remedying injector-related issues, assuming that no electrical or mechanical failure has taken place.

While injector cleaning is typically handled by professionals, those who are mechanically inclined can clean their own injectors at home, to a high degree of success.

The following are the average costs associated with fuel injector cleaning:

In the event that you choose to take your vehicle to a professional shop for a fuel system/fuel injector cleaning service, you can expect to pay somewhere within a range of $60-$150 for such services.

Cleaning severely fouled injectors is a far more pricey proposition, often costing nearly as much as fuel injector replacement, due to the extensive labor required. In such cases, one can expect to shell out approximately $350-$700.

If so inclined, one can also remove and clean their vehicle’s fuel injectors themselves, eliminating unnecessary expenditure along the way. In such instances, only those materials required to perform services per manufacturer are required.

In most cases, these supplies and materials total up to no more than $100. You simply need cleaning kit (like this one) which allows you to easily test and clean individual injectors, fuel injector cleaner (like Seafoam or B-12 Chemtool)

The exact cost associated with fuel injector replacement differs from one model of vehicle to the next. Price fluctuations are also to be expected between dealership-based and private shop-based repairs.

For this reason, it’s always important to receive multiple quotes before determining where to have any such work conducted.

Though figures can differ significantly depending upon a number of variables, one can expect to pay approximately $400-$1,000 to have their vehicle’s fuel injectors replaced.

The lower end of this spectrum typically relates to smaller sedans featuring four-cylinder engines, while higher costs tend to be associated with V8-powered vehicles.

Is It Ok To Replace Just One Fuel Injector? 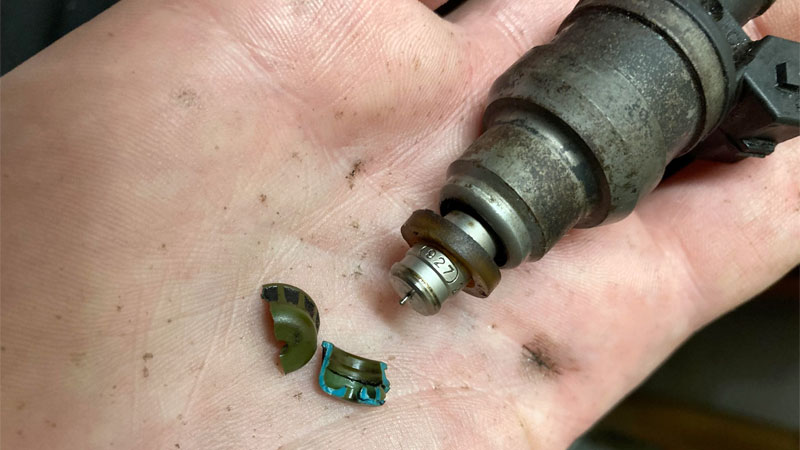 It is never advised to replace just a single injector. This is due to the fact that all of an engine’s injectors should be of a similar age, and should exhibit nearly identical wear/degradation.

Therefore, replacing just a single injector would likely prove counterproductive, necessitating further diagnosis and repair as other injectors of the same vintage begin to fail.

Simply put, replacing just a single injector is more of a band-aid than an actual proper repair.

Steve is a former ASE Certified Technician and holds a degree in automotive service technology from Weber State. When he’s not searching for a 10mm socket in his garage, he enjoys a good BBQ with family and friends.

Fri Nov 11 , 2022
What is actually underneath the Accord’s hood? As it did with the modern introduction of the redesigned CR-V, Honda is mashing with each other the Accord gas and hybrid variations into just one trim structure. That indicates the LX and EX trim concentrations aspect a gasoline powertrain, whilst the Activity, […]