Corvette versus Porsche 911. Camaro versus Mustang. Camry and Accord. The major automotive rivalries seem like they’ve always existed, but every grudge has a genesis story. As EVs become more common, new rivalries are beginning to emerge. Tesla would like you to think that all other electric vehicles are inferior to its offerings, and the brand’s proprietary DC fast-charging network thoughtfully spread over the United States is indeed second to none.

Somewhere to plug in and recharge should be a major consideration for EV buyers, but it shouldn’t be the only consideration. Like gas-powered cars, EVs are more than just appliances to move us from home to the store. Regardless of what powers it, a good car should handle well and provide a fun and lively driving experience, but it should also be comfortable, refined, and offer the best possible value. Enter the new Ford Mustang Mach-E. In its big-battery all-wheel-drive form, the Mach-E E4X is the sort of opponent to Tesla’s Model Y Performance that is sure to start a long and bitter rivalry for these two American brands.

This might be the first EV test where we won’t so much as discuss range anxiety because the $56,400 Mach-E in E4X trim can go 270 miles between charges (per the EPA’s anything-but-straight yardstick) and the Tesla comes in at 291 miles.

Before you post your comment below, we’ll let you know that we’re aware that the Model Y Performance isn’t the most direct competitor to the 346-hp Mach-E Ford loaned us. The $62,190 Model Y Performance lines up better with the upcoming 480-hp Mach-E GT. A better foil for the Mach-E E4x would be the $53,690 Model Y Long Range, but Tesla wouldn’t cough one up and we were unable to find one to rent or borrow. We did, however, land a more powerful Model Y Performance that has 178 horsepower for the front induction AC motor and 240 horses for the rear synchronous motor. Tesla is so unhelpful that we had to look through federal documents for those power figures.

While an admittedly imperfect pairing, the less powerful Model Y probably wouldn’t have affected the finishing order. But this is surely the first of many more comparisons as Tesla and Ford give birth to a new rivalry.

Highs: Access to a fast-charging network that is second to none, muscle-car straight-line performance, curb appeal.

This Model Y is a head-scratcher. It is essentially a taller Model 3—a car we like—with a slightly different wheel-and-tire combo, a higher roof, longer gearing from the larger wheels and tires, and yet if you drive the two back to back you might think they have nothing in common. While the 3 is a joy, the Y isn’t.

What the Y does have is Autopilot. And judging from the interest of other drivers about the Tesla’s ability to sort-of drive itself, hands-off tech is important to would-be buyers. The system isn’t yet fully baked, but updates and changes are always rolling out, provided you selected the $10,000 Full Self-Driving option.

What is fully baked is the Y’s powertrain. While we may not know exactly how much power they make together—it’s not as simple as adding the horsepower numbers since the motors may achieve them at different speeds—the Y’s two motors send it to 60 mph in fleet 3.6 seconds and through the quarter-mile in 12.1 seconds at 113 mph. It’s easy to extract that performance, too. Just keep the wheel pointed straight, floor it, and go. You’ll dust most Mustangs, the ones that burn gas.

In the interest of making an apples-to-apples comparison, we perform a range test that keeps the vehicle running at a steady 75 mph until the battery is nearly depleted. In that test, the Model Y covered 230 miles, which is a great result for an EV. But the less expensive Mach-E with a larger battery managed 250 miles in the same test.

Tesla fits Pirelli P Zero PZ4 Elect tires to the Performance version, and those sticky summer tires aren’t as efficient and can’t stretch the range as much as more dedicated low-rolling-resistance rubber. The major benefit of those tires is that they have a lot of grip. On the skidpad, the Y held on at 0.94 g and helped stop it from 70 mph in a short 154 feet. Those performances are that much more impressive when you consider the Y weighs 4439 pounds. But start hustling the Y Performance down a curvy road and any relationship between the sweet-handling 3 Performance and Model Y Performance becomes hard to see.

Turning the Y’s small-diameter steering wheel requires lots of effort to get it to turn. We’re fine with high efforts, so long as the force is communicative and natural, but the Y’s is rather numb. Once you deviate from going straight and start bending into corners, the Y becomes a bit nervous and darty, vectoring and re-vectoring like a poorly tuned video-game controller. Drive the Y hard and it seems out of step, like there is a glitch in software.

Speaking of glitches, we found Tesla’s quality lacking. A few hours into our loan, the infotainment system had a mini stroke. Most controls remained functional, but the GPS and backup camera stopped working. A minor hiccup isn’t that noteworthy, but nearly every function of the car, from adjusting the mirrors to turning on the wipers, is done through the big screen. If the gremlin spread, would you lose the ability to drive the car safely? Fortunately, it remained a glitch and didn’t spread.

Other quality issues included the Y’s inconsistent panel gaps that wouldn’t be acceptable in a $40,000 car, let alone one with an as-tested price tag of $72,190. Tesla does make vehicles that feel different and that enjoy an unparalleled charging infrastructure. The interior design looks futuristic, and the acceleration is addictive and intoxicating. But the handling quirks and the quality concerns make it difficult to wholeheartedly recommend.

Lows: Powertrain is more four-banger Mustang than V-8, can feel its weight in corners, chassis limits are beneath a turbo Mustang.

Whether or not you think using the name Mustang for an EV SUV is wise­—notice that we usually call it the Mach-E—the vehicle that Ford has engineered is a winner. Judging from how many are on the roads near our offices in Michigan, we’d say Ford is onto something big. Granted, many of the sales were likely greased by the employee and friends-and-family pricing offered to Ford workers and their kin.

The Mach-E’s biggest spec win comes from its large 88.0-kilowatt-hours battery that helps it go 250 miles when cruising at 75 mph. Unlike Tesla, Ford doesn’t enjoy a dedicated network of DC chargers, so Mach-Es have to rely on the third-party ones, such as those from Electrify America, ChargePoint, and EVgo. Plan your route carefully and it’s not too much of a problem, but the Mach-E isn’t going to be the choice for a cross-country road trip until those networks get a little denser, at least in the Midwest.

When you’re between charges, the Mach-E hums along the freeway with 68 decibels of white noise to the Model Y’s 70. Two decibels may not seem like much, but sound pressure is a logarithmic scale. When you swap from Tesla to Ford, the lack of isolation in the Model Y is apparent and makes the Ford seem a bit more refined. Insulation from road, tire, and wind noise is a luxury-car hallmark. EVs don’t have an engine, so road noise, wind rush, and suspension clatter is that much more obvious. A well-isolated EV like the Mach-E does a pretty good impression of luxury, until you notice that some of the interior’s plastic bits are of the cheap and hard variety.

At the test track, the Mach-E falls short of the Tesla. On all-season rubber that is no match for the sticky Pirellis, the 4838-pound Mach-E hits 60 mph in 4.9 seconds, stops from 70 mph in 177 feet, and holds a skidpad at 0.82 g. Handling is secure to a point. Start pressing hard, as C/D testers always do, and the front struts begin pogoing in response to near-limit cornering stress. The solution is to temper your Mustang expectations and dial it back a bit. Drive it less aggressively and the steering’s accuracy and the secureness of the handling comes through.

The Mach-E’s interior has a 15.5-inch screen, but Ford doesn’t put all of its control eggs in one touchscreen basket. Directly in front of the driver is a smaller display for gauges and other information, but Ford seems to have thought that the distracting animations that play on it were a good idea. A simple digital speedo would suffice. Both the Model Y and the Mach-E also thought it necessary to rethink door handles. The Ford has small buttons that electronically pop the door open, but pushing it while grabbing the small handle and opening the door takes some getting used to.

The Mach-E’s seats are more comfortable than the Tesla’s harder chairs. You sit in the Ford’s seats, while you sit atop the Tesla’s. Neither enjoys a large-enough back seat to support adults for hours on end, but the Ford squeezes out a narrow of victory in cargo room. The Mach-E holds one more carry-on-size suitcase with the seats folded (20 to 19), while both carry up to seven with the second row upright.

Ford prices the big-battery Mach-E E4X at $56,400, a few grand less than a 2021 Y Performance without the Full Self-Driving option. Factor in the $7500 tax credit for which the Ford is eligible and the Tesla is not, and the price gap grows. There’s a lot of value in the Mach-E and Y, and we’re sure this is just the beginning of what’s sure to become an old rivalry. On price, refinement, and assembly quality, Ford wins the first round.

This content is created and maintained by a third party, and imported onto this page to help users provide their email addresses. You may be able to find more information about this and similar content at piano.io

How to navigate 4th of July sales this weekend

Fri Jul 2 , 2021
4th of July deals 4th of July sales are well underway, and shoppers can find deep discounts on a wide range of products right now.  Whether you’re looking to upgrade a mattress or buy an air fryer, there are plenty of deals worth exploring during 4th of July sales events. […] 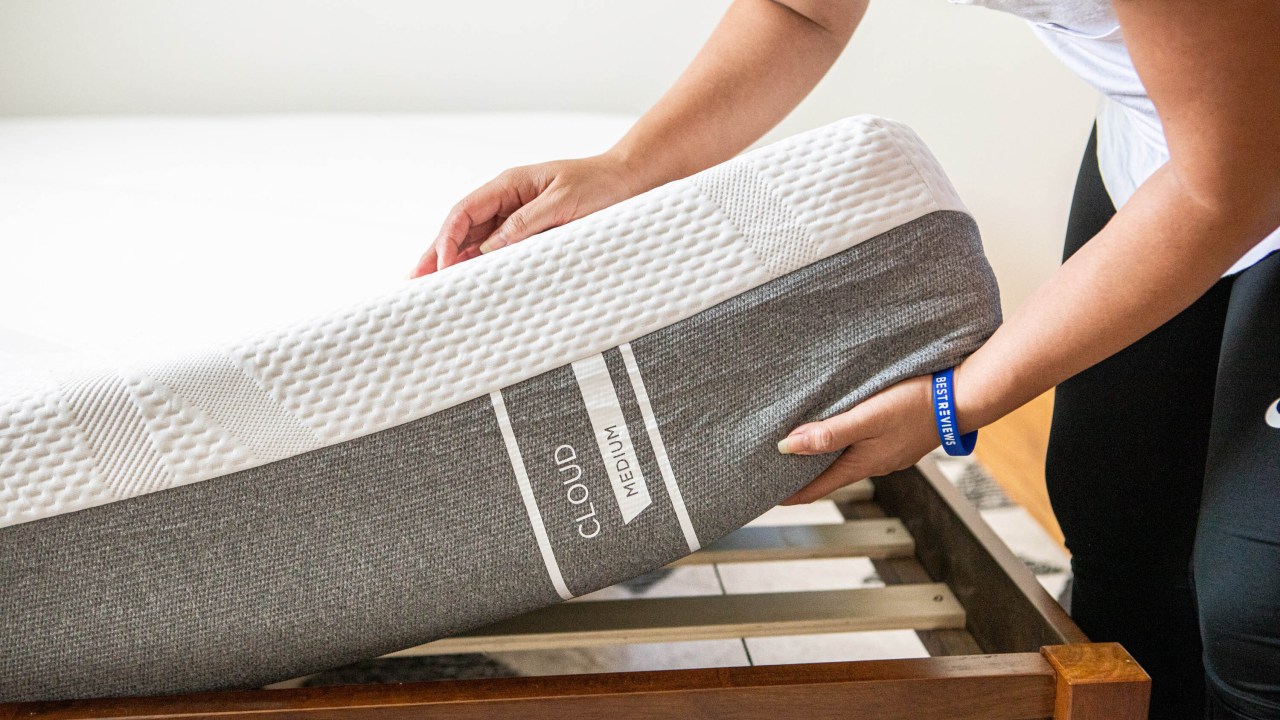